Sagwa Miao is the titular protagonist of the series. She is a Siamese kitten who lives in the palace of the Foolish Magistrate of a 19th-century Chinese village. She is the middle child of the Miao family. Her best friend is Fu-Fu and is also friends with Shei-Hu and Ping Wing.

Sagwa has a trait of the Miao Family of being good scribes. However, unlike her parents, Sagwa doesn't pass laws under the Foolish Magistrate's orders. Quick-thinking, creative, and sometimes a bit bossy (in "Sheegwa and the Blizzard," she monopolizes Sheegwa's toy and tells her to not forget her umbrella), she prefers to spend most of her time playing in the village or palace garden with her best friends Fu-Fu, Shei-Hu, several Alley Cats, and her siblings.

Sagwa is kind and occasionally offers advice to Sheegwa, but is also naive and extremely curious. It is revealed she met Fu-Fu when he saved her from an old pot full of dust. When he asked her what she was doing, she replied she was trying to see what was in the pot.

Sagwa is pure white, but a story in "How Sagwa Got Her Colors" reveals her fur was dyed when she fell into a pot of ink, giving her typical Siamese markings on her tail, paws, and face. 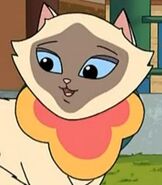 Add a photo to this gallery
Retrieved from "https://sagwa.fandom.com/wiki/Sagwa_Miao?oldid=5951"
Community content is available under CC-BY-SA unless otherwise noted.